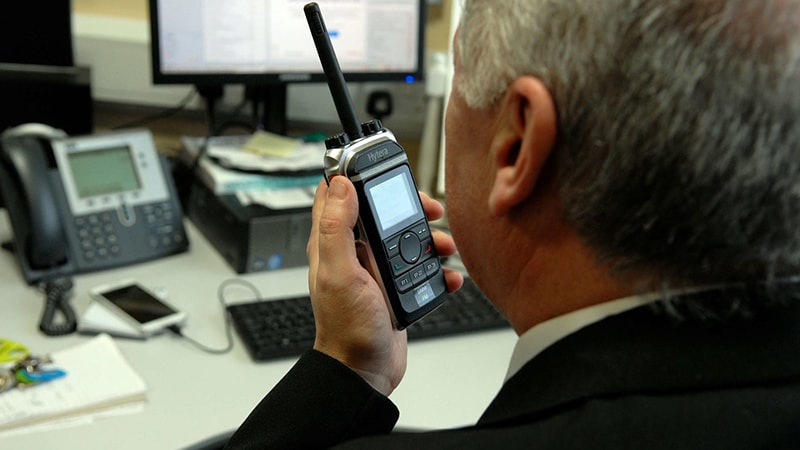 Any growing company at some point must face new ways on how to improve overall staff communication and coordination for production efficiency.

The implementation of two-way radio communications for its staff is a quick, inexpensive and very effective way of doing so.

Why set up two-way radio communications for the company

It is a fact that using two-way radios for business instead of regular phones, or even smartphones, increases productivity. Its is a cheaper, quicker response and raises productivity

In first place, you would be able to broadcast a verbal message to your whole staff instantly, instead of having to call each one of them individually.

Some companies have group communications based in applications through smartphones, but even in those cases, the message may not always be delivered at the same time to everybody, or not of them all are able to see immediately.

Using two-way radios, everybody who is having one of the company two-way radios will be able to hear the message, at the same time.

Finally, using two-way radios help staff to focus in their work at hand, instead of be flipping to others work-unrelated apps, like social networks.

How to get started

There are many options that can be helpful for your company operations, but instead of starting by looking for devices, think in what your needs are.

If you have any experience with two-way radios, some of the following terms may sound familiar, but even if you do not have experience at all, it is easy to get what they mean.

So, to get started, you can answer these 5 questions:

1) Define what you need

The first step would be to decide what your needs are. You could ask yourself the following questions:

So, put together a list of what is for your company an absolute must and also what you would like, if possible.

Call us today at 786-306-6451 or email us at sales@portable-repair.com to discuss about your two-way radio needs.

If you prefer, get a quote from us, by explaining your radio communication needs.

There are mobile and portable two-way radio devices.

Mobile two-way radios are units that are installed in vehicles, like boats, buses, etc.

Portable two-way radios are units that can be carried around. Some people know them as “walkie-talkie”.

Knowing this, define where do you need to use your two-way radios. Is it for people on-the-go? Is it to communicate from one office to another, or one car to another?

In many cases the whole two-way radio system for your company may have a mix of both types.

There are two frequencies options for radio comms: UHF and VHF.

UHF stands for Ultra High Frequency (403-512 MHz) and is suited mainly for indoor applications where there may be some obstacles.

VHF are the initials of Very High Frequency (136-174 MHz) and is intended in first place for outdoor applications without much interference.

You may now understand how different should be the two-way radio devices used inside a manufacturing plant than the ones used in a field, by farmers.

You need to think carefully how many people in your organization is going to be using the two-way radio system.

This is what tell you how many devices and channels you could need.

When consider this, think not only in the usual use, but also in emergencies.

To that end, you may need private channels, like for management, security, etc.

Of course, you should as well leave some room for growth.

Finally, think about where the two-way radios are going to be used.

For example, do you have only one big facility with office and warehouse or do you have several small different locations that should be connected?

Is a good idea to set a range where your staff is going to be using the two-way radio system, in a normal operation.

And where defining where, take a look also to the type of terrain you are located in.

It is your city mainly plain, like Miami, or are you located in an area with several hills?

This very fact can impact tremendously in how your two-way radio system should be set up.

You do not need to know all

Planning a complete two-way radio system for your company can become an overwhelming task.

We have over 30 years working with two-way radios and, after knowing your needs, we can get you up and running in no time.

Since 1986 we have been selling, renting and repairing two-ways radio systems

This long experience is a reason to trust us your communications devices, so important for your operations. We offer a fast and affordable two-ways radio repair service in Miami, Broward and Palm Beach.

Get to know our services